Identifying Filipino cuisine through its regions 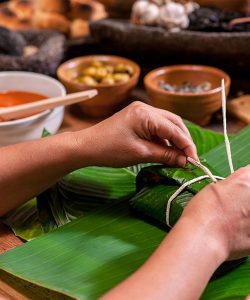 There are as many versions of the Filipino adobo as the archipelago’s 7,641 islands. Taking a tour from north to south, one will discover that adobo varies not only in taste but also in the ingredients used and the cooking methods applied. Every region has its own interpretation of Filipino dishes, and that applies from adobo to sinigang, pinakbet, and even rice cakes.

“Our regional food offers a bit of everything to satisfy different individuals,” shares Jam Melchor, founder of the Philippine Culinary Heritage Movement. In Central Luzon, where he is from, food is more elaborately prepared compared to the simpler methods of Northern Luzon. In Southern Luzon, there is a preference for freshwater fish, vinegars, coconut milk, and chilies. “In the Visayas, they use a lot of fresh or dried seafood. Cooking is very simple and pure,” he adds.

Darence Patrick Co, a chef from the Davao Region in Mindanao, describes the food down south: “It is bold, versatile, and culture-driven.” There is emphasis on using the freshest seafood and fruits through cooking methods that do not mask their original flavors. 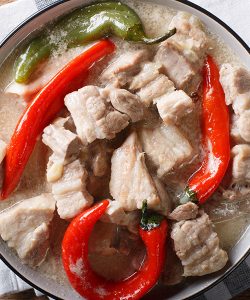 Ingenuity is also applied. “One ingredient can be used in a hundred ways.” Take the coconut, which is known as a key ingredient in Bicolano cuisine but is also highly utilized in Mindanao, where it is pressed for milk and oil and even burnt to make a dish called pyanggang. “I once tried a simple ginataang sina (a mini version of geoduck) local to Davao Occidental,” shares Co. It uses the coconut’s oil, milk, and cream in a single dish.

Edgie Bongato Mercado Polistico, author of Philippine Food, Cooking, and Dining Dictionary, further explains how regional food is identified. “The territory where regional food exists does not follow how the Philippine archipelago is subdivided into regional political territories. Rather, its domain is identified by a certain community practicing common foodways and the use of whatever ingredients are available in that place.”

“Basically, regional food is often claimed or identified with an ethnolinguistic group because it is named using the local language of that place. Thus, we have food of the Tagalogs, Ilocanos, Capampangans, Bicolanos, Ilonggos, Cebuanos, Maranaos, Maguindanaons, Tausugs, and others.”

One ingredient can be used in a hundred ways.

A region’s ingredients are affected by topography, weather, distribution network, economics, and commerce. “The food of Central Luzon and mainland Mindanao is mainly from farm produce and whatever they catch in the wilds,” shares Polistico. “Regions along shorelines enjoy seafood, like in the seafood capital Roxas City of Capiz.”

Varying inventory of supplies also affect the regionality of a certain dish. Polistico takes adobo as an example. “In Bulacan, sukang paombong is used because it abounds there. In Visayas, sukang tuba is commonly used. In urban areas, they use commercial white vinegar that is conveniently available in grocery stores.”

Taste preference is the next factor. Tagalogs prefer their boiled fish or stewed pork strongly soured, like in sinigang. “But Visayans abhor very sour soupy dishes,” says Polistico. “They may also put a souring fruit in their tinolang isda but subtly.” Bicolanos and Maguindanaons are fond of making their dishes fiery hot. Ilocanos, meanwhile, are unique for having an affinity for bitter dishes, like the papaitan, a soupy dish of innards. Other regions do not like bitter-tasting dishes.

“Coffee is served very sweet in regions where sugar is produced like in Batangas and Negros. These regions are also known for their sugary pastries and other delicacies,” shares Polistico. “Unlike in Tawi-tawi, local pastries and snacks are subtly sweetened because they have a limited supply of sugar.”

Culture and traditions also affect regionality. Food can be used for offerings, celebration, and medicine in different localities. Religion factors in here, too. “Muslims of Mindanao avoid pork because of religious beliefs, while non-Muslims love to eat pork.” Pork is prominent in lavish fiesta celebrations, usually done to honor a town’s Catholic patron saint.

As the dish migrates to another region, some ingredients are added, some are replaced, and some are removed for varied reasons

Lastly, dining practices factor in. This recognizes that even food wrapping and packaging can affect a region’s interpretation of a dish. All over, banana leaves are used to wrap different types of food. In the northernmost islands of Batanes, however, kabaya (huge breadfruit leaf) is used. In Samar, hagikhik leaves are used to wrap rice cakes, while in Aurora and Rizal, ibus (young coconut palm) is used.

Beyond these four main factors, regional food also shifts and merges with food from other regions through migration, fusion, and appropriation. Take the pinakbet as an example: For the Ilocanos, it is a dish of pure leafy vegetables flavored with patis (fish sauce). For the Tagalogs, it is changed by adding squash, bagoong alamang (shrimp paste), and pork. In Mindanao, pork is replaced with freshwater fish or seafood.

“As the dish migrates to another region, some ingredients are added, some are replaced, and some are removed for varied reasons,” says Polistico. This diversity reflects the richness of Filipino cuisine, and it might even serve as the reason why the country cannot present a singular national dish to the world. Because, really, any one of these regional dishes is worthy of recognition.