Chef JP Offers a Taste of Home in his Dubai Restaurant 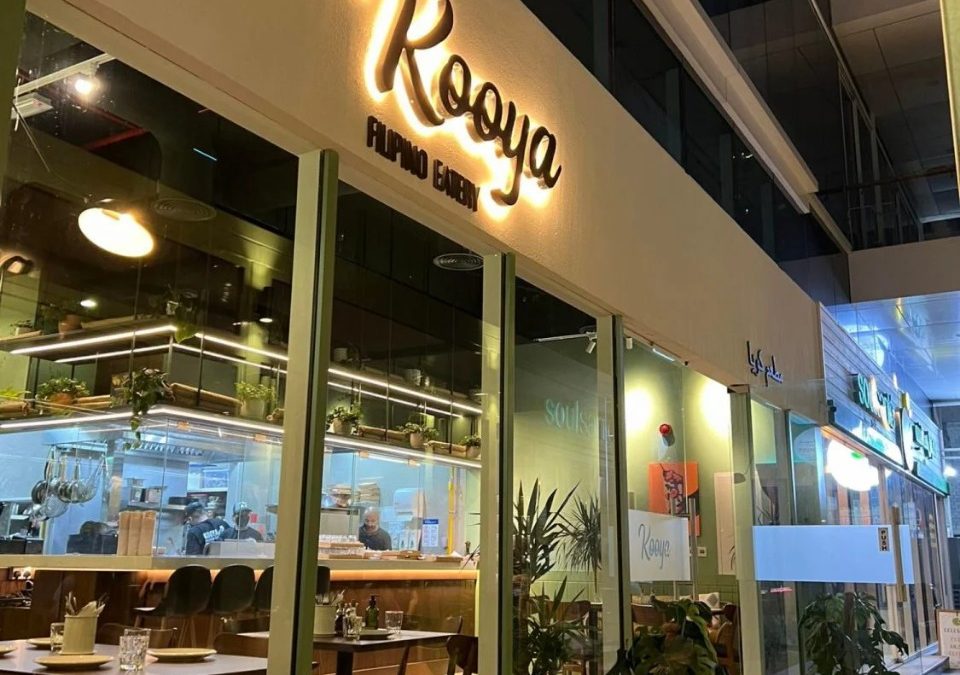 There is no pork on the menu. A typical Filipino restaurant would have several iterations – lechon, sisig, crispy pata, inihaw na liempo, sinigang na baboy. But not at Kooya. Not cooking with pork is among the regulations, as well as halal guidelines, that chef JP Anglo had to consider in opening his new restaurant in Dubai.

Sourcing for Filipino ingredients hasn’t been the most difficult task, with numerous items exported from the Philippines available even in Dubai’s neighborhood convenience stores. But Anglo admits he wishes to get his hands on some specific ingredients. They’re still looking for fresh calamansi while banking on lemons and limes for the meantime. They could only find annatto powder at the beginning despite recipes requiring the seeds. They already stopped the search for fresh kamias.

But in no way does this mean that quality is jeopardized. “Whatever we can find here, we temper into our kitchen,” he says. At Kooya, Anglo is reintroducing local flavors he hasn’t attempted to do in his previous outposts. There’s kare-kare but, because of the tweaks in ingredients, it’s unlike any of the versions he’s done before. “The inasal is completely different but it’s still an inasal. The smokiness is there, but the flavor is different.”

Anglo is not veering away from what he calls “authentic” elements of cooking but his results are playful, stimulating, and boundary-pushing. He’s showcasing a level of maturity this time: “Like ‘kuya’ in Filipino, Kooya is the older brother of Sarsa and an older brother always feeds you, looks after you, and leads the way.”

It’s that kind of spirit many Filipinos in Dubai, Kooya’s prime clientele, are yearning for. “The Filipinos here are amazing. [Although] they have a longing for a kitchen that cooks honest-to-goodness soulful Filipino food,” Anglo says. “Filipinos are the third largest migrant population in the Middle East. There’s such a big community! But after being here for a long time, the places they can go to have become limited. They want something else.”

Some of these Filipinos are not allowed to cook dried fish in their apartments. “So when we offer them dilis as an appetizer, they get excited.” It’s nostalgic for kabayans, the term used to call fellow Filipinos. For them, it feels like being teleported back home or like being given a warm hug. “It may not be as appetizing to other nationalities, but this is who we are,” says Anglo. He points out that a lot of these kabayans have no time to cook so Kooya puts in the effort for them. “We offer them malasakit (heartfelt concern). We give our food more time and care. Because it’s worth it! They’re worth it.”

But with Dubai being a melting pot of different cultures, Kooya is gearing up to be a Filipino global kitchen that also serves non-kabayans. They will experience a chef-driven, family-style, casual dining experience within a cool, Gabby Lichauco-designed, greenhouse-inspired space–elevating the preconceived notions of the way Filipinos eat and live. “This is about our cuisine and where it can go,” says Anglo.

The chef is also quick to admit that he cannot do it alone. He brought in some chefs from the Philippines and took in some Filipinos already working in Dubai to form part of Kooya’s kitchen and front-of-house teams. “This is a first for almost everyone. They’re so happy to eat Filipino food for their staff meal every day,” says Anglo. “But we’re also working to get more nationalities into the mix to get diverse perspectives.” Anglo’s wife has also played a vital role in moving things forwards: “Camille has been our rock. She’s been our anchor, the backbone of all this.”

The idea of opening in Dubai came to the couple after doing successful pop-ups during the pandemic. “Our second visit cemented the idea of setting up a kitchen here. That was March 2021. Come December, on our third visit, we were already doing construction.” It hasn’t been a walk in the park for JP, Camille, and the Kooya team, but the goal of showcasing Filipino food in a different light has been driving them nonstop. They owe it to the hardworking Filipino community, the kabayans, longing to be brought home by way of food while still wanting to prove to others that they, too, can compete on the global stage. Chef JP is primed for that mission, even if it takes one fresh piaya at a time.